Our highly reviewed NYC law firm is based in Manhattan but handles cases throughout NY State and New York City including Manhattan, Brooklyn, Queens, the Bronx, and Staten Island. 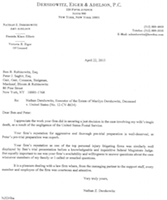 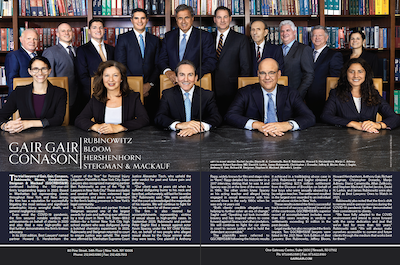 9 of our Lawyers have been listed in the 2022 Best Lawyers in America as seen in New York Magazine: Marijo Adimey, Diana Carnemolla, Ben Rubinowitz, Jeffrey Bloom, Anthony Gair, Christopher Donadio, Richard Steigman, Howard Hershenhorn and Allan Zelikovic . Each of these attorneys have achieved multi-million dollar recoveries on behalf of their clients. Richard Steigman also received the prestigious Best Lawyers™ 2022 Medical Malpractice Law - Plaintiffs "Lawyer of the Year" award in New York, NY. Additionally 3 of our young lawyers were included in the 2022 "Ones to Watch" list: Rachel Jacobs, David H. Larkin and James Rubinowitz. 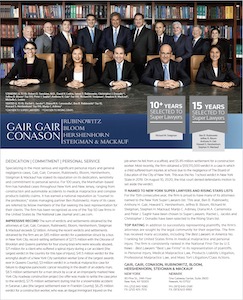 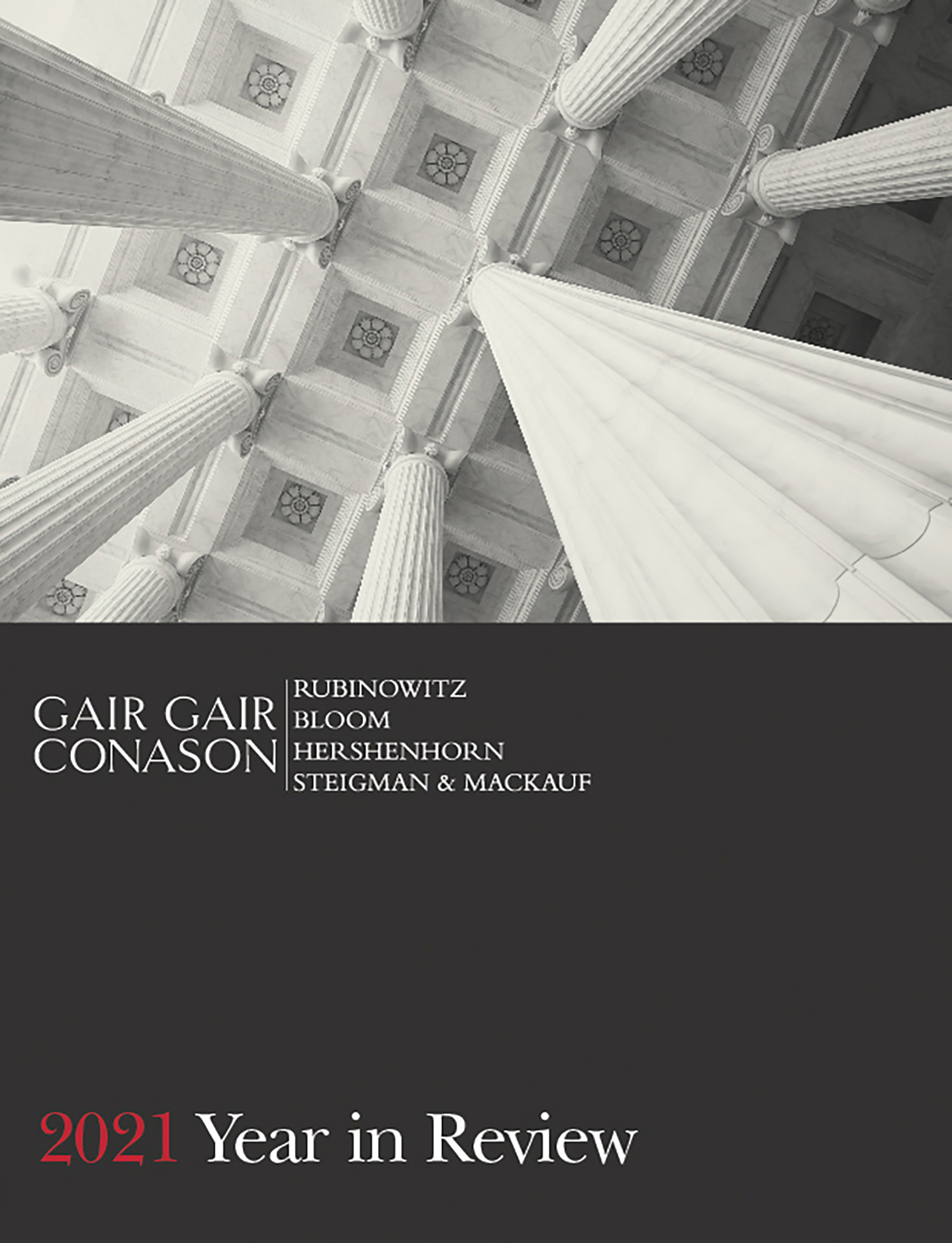 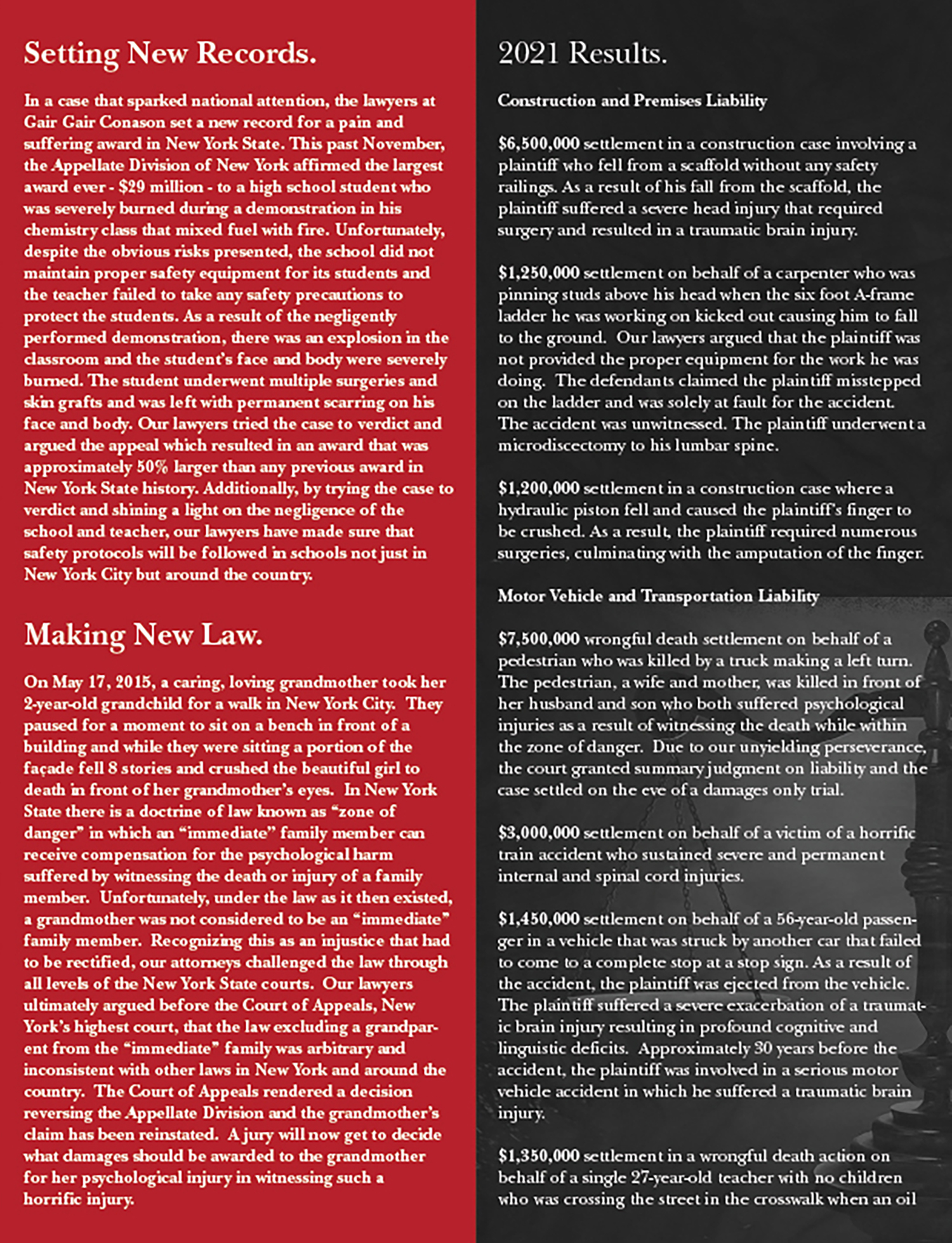 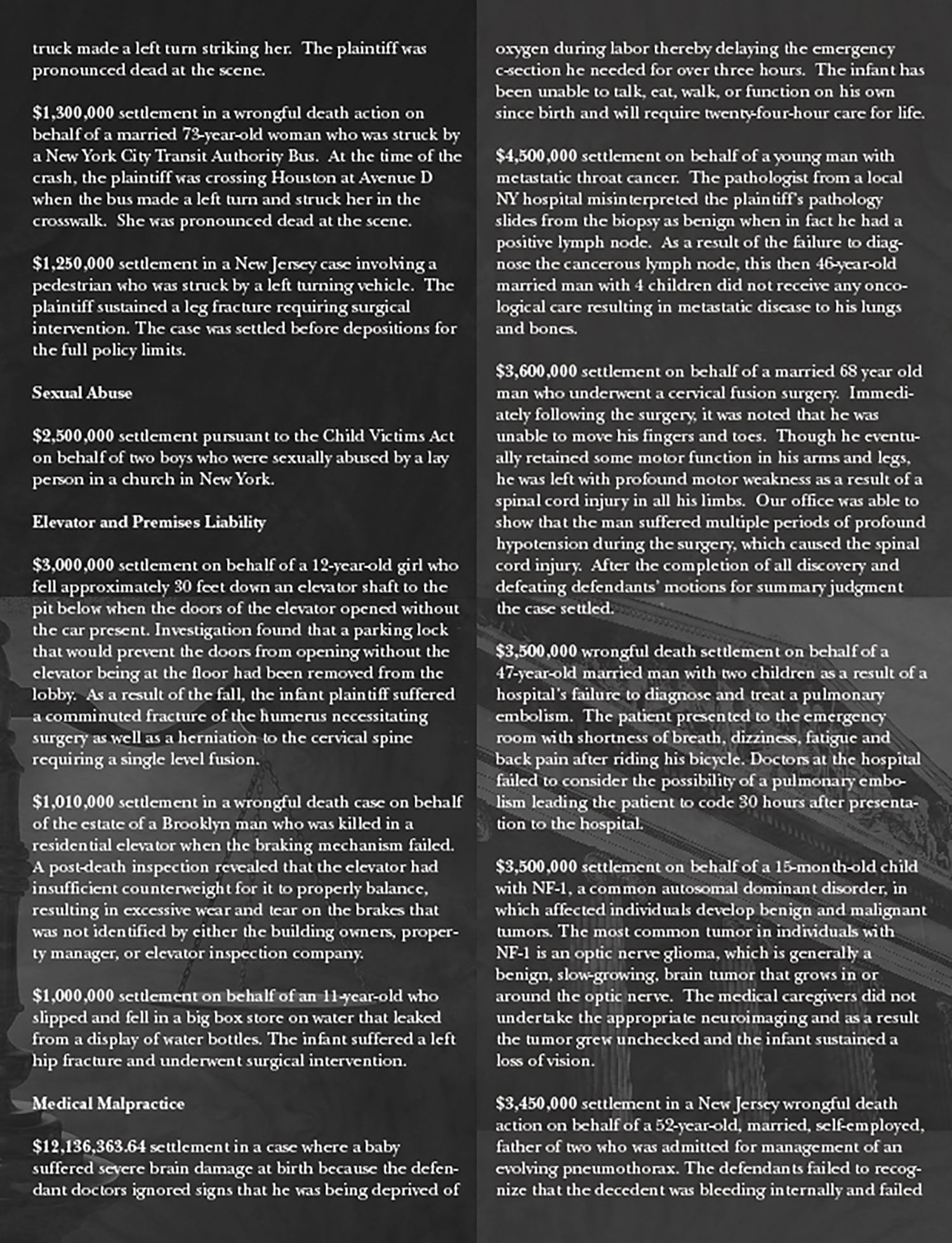 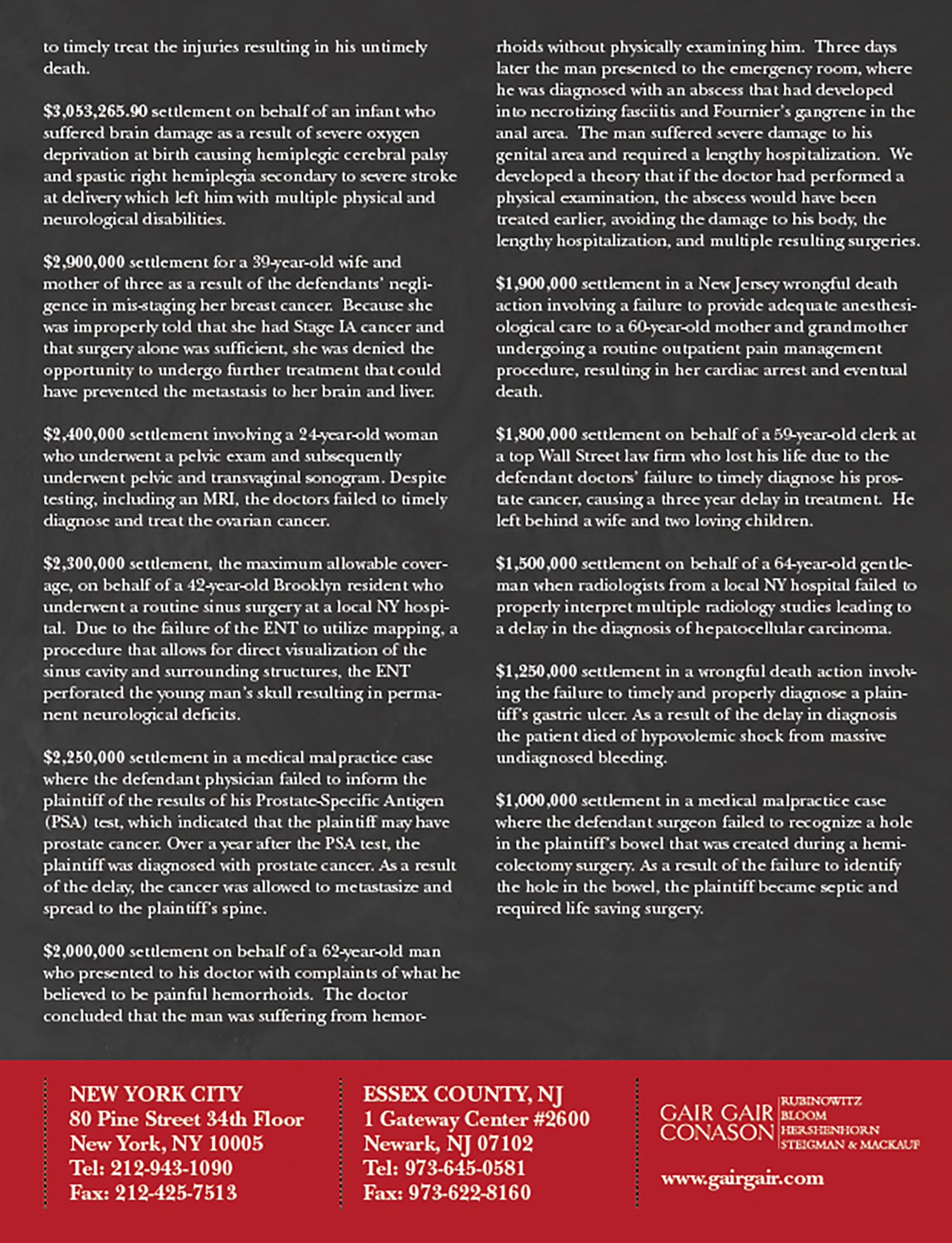 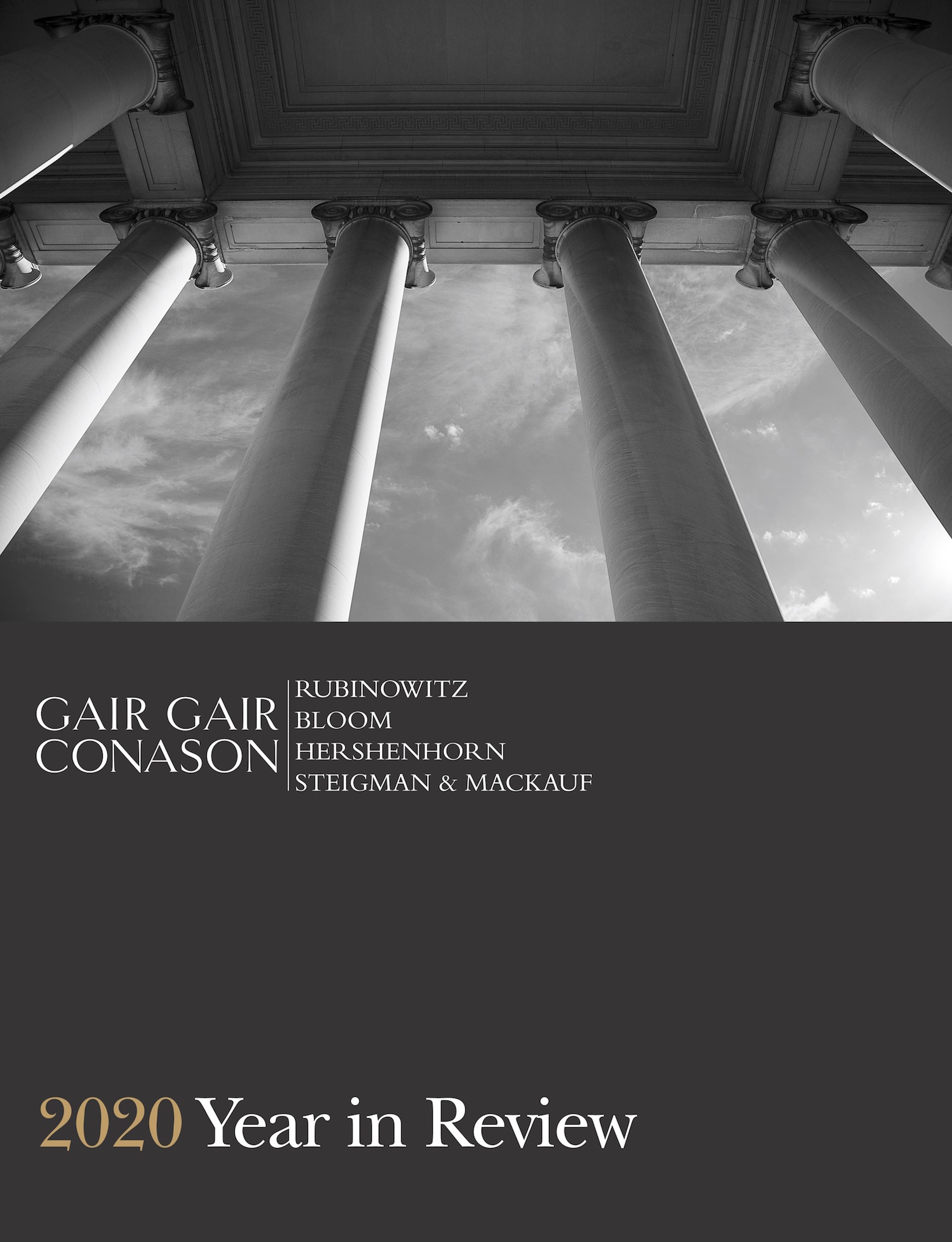 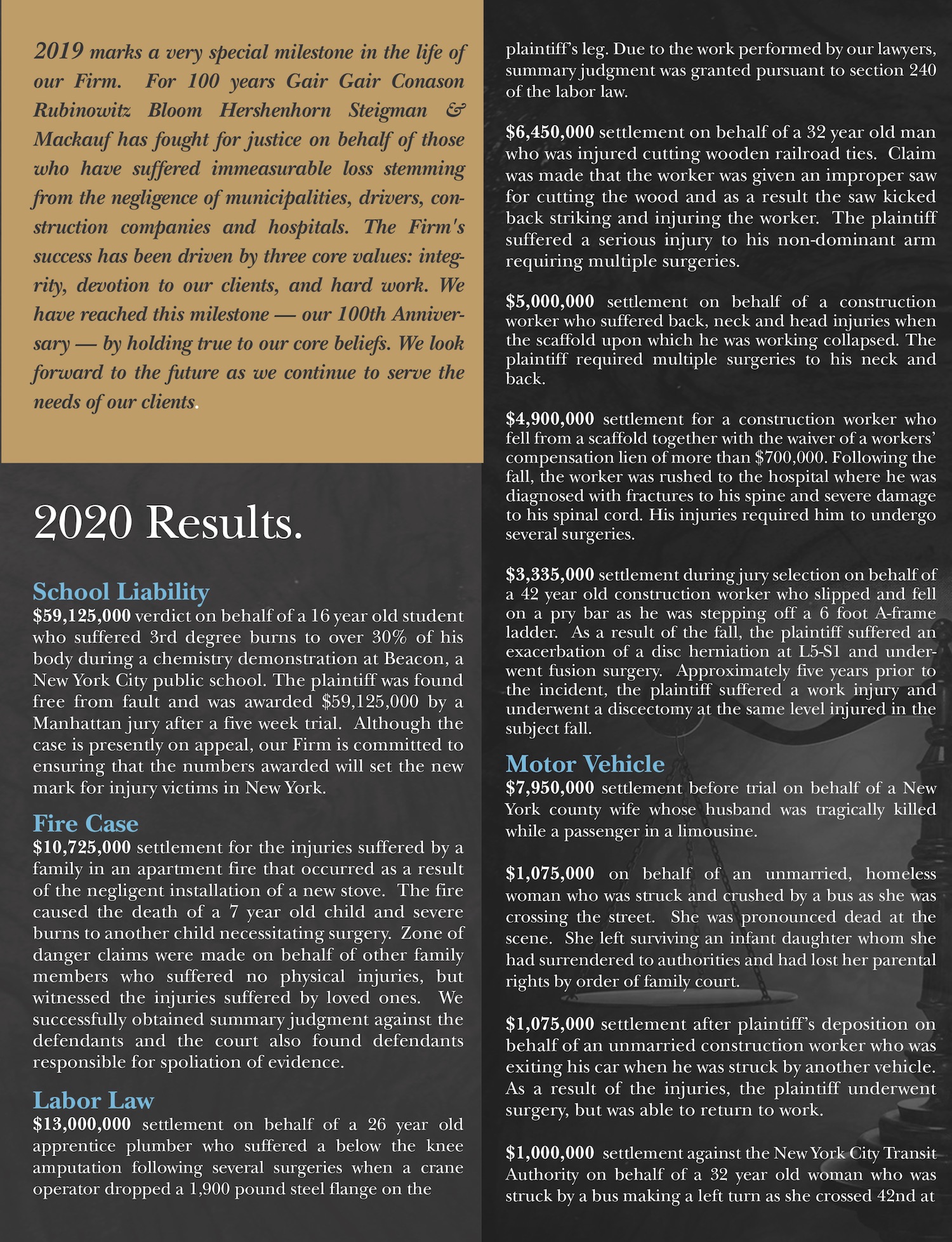 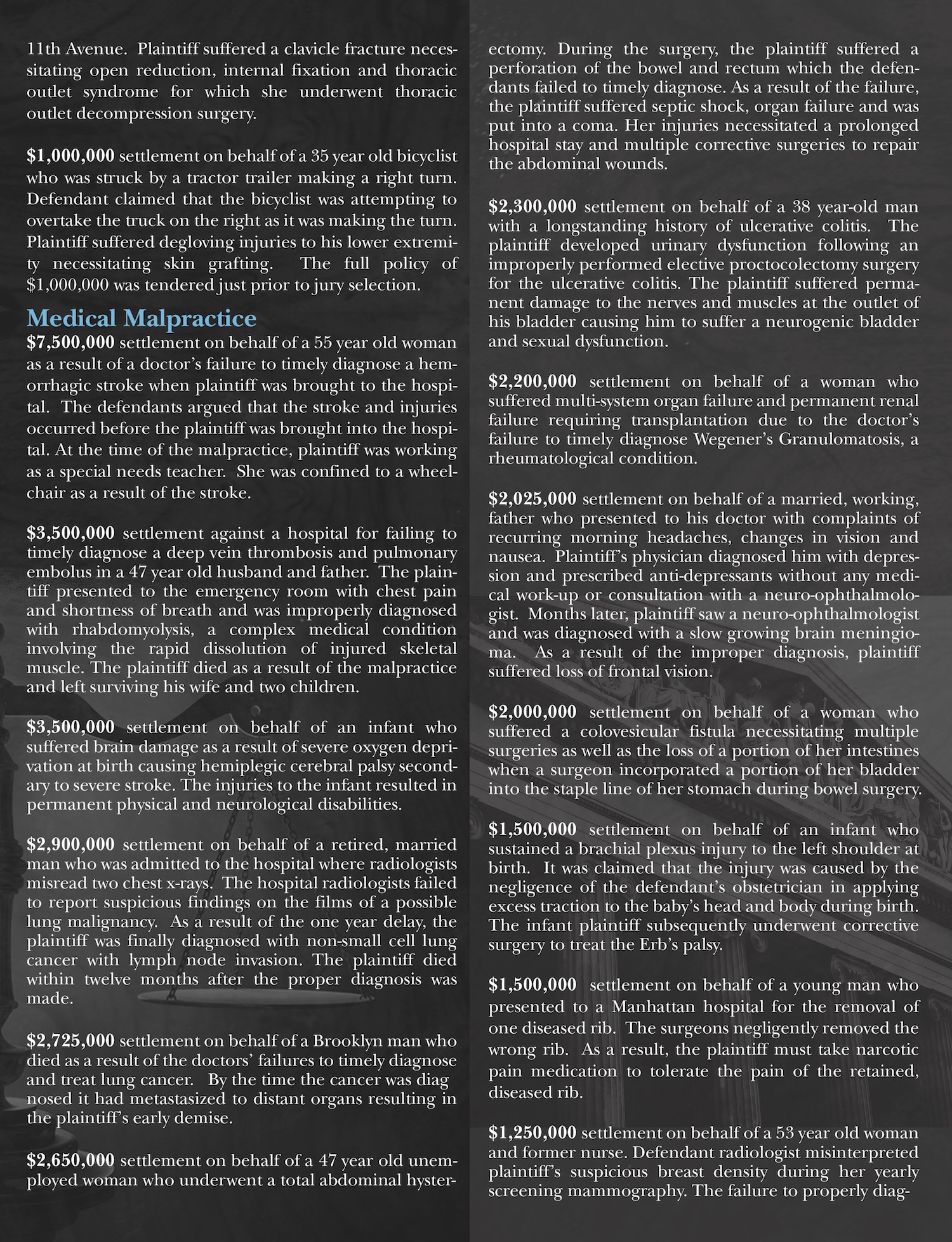 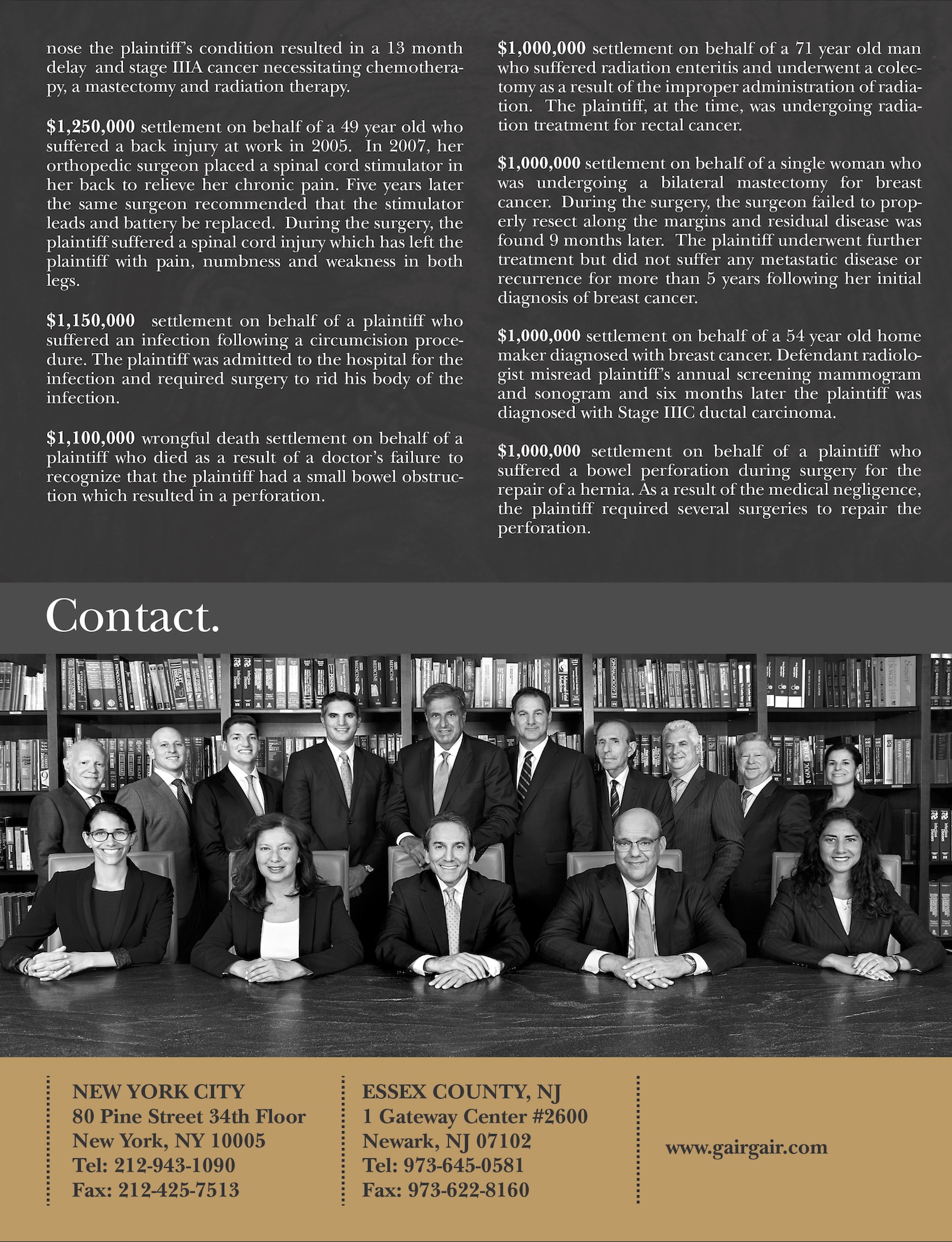 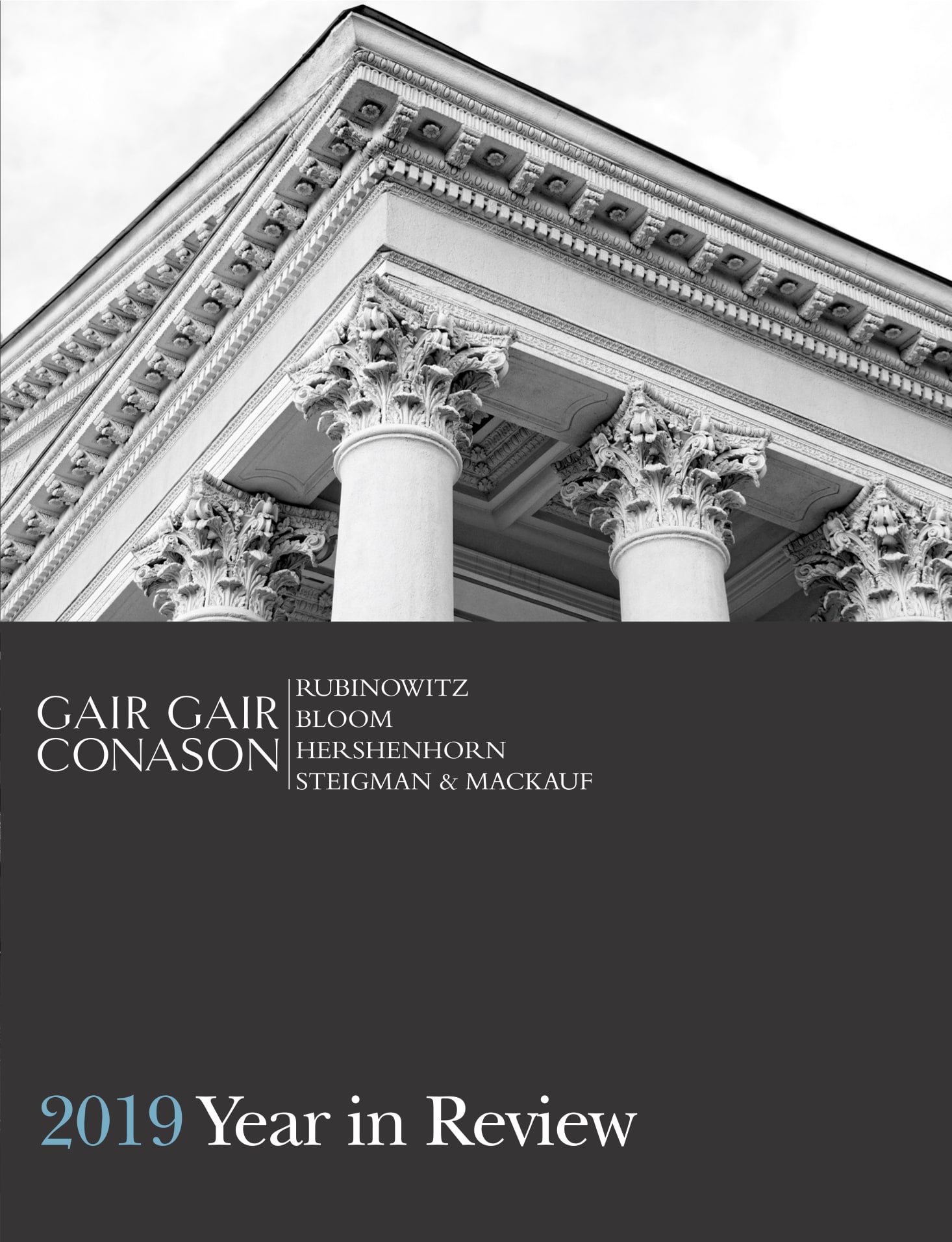 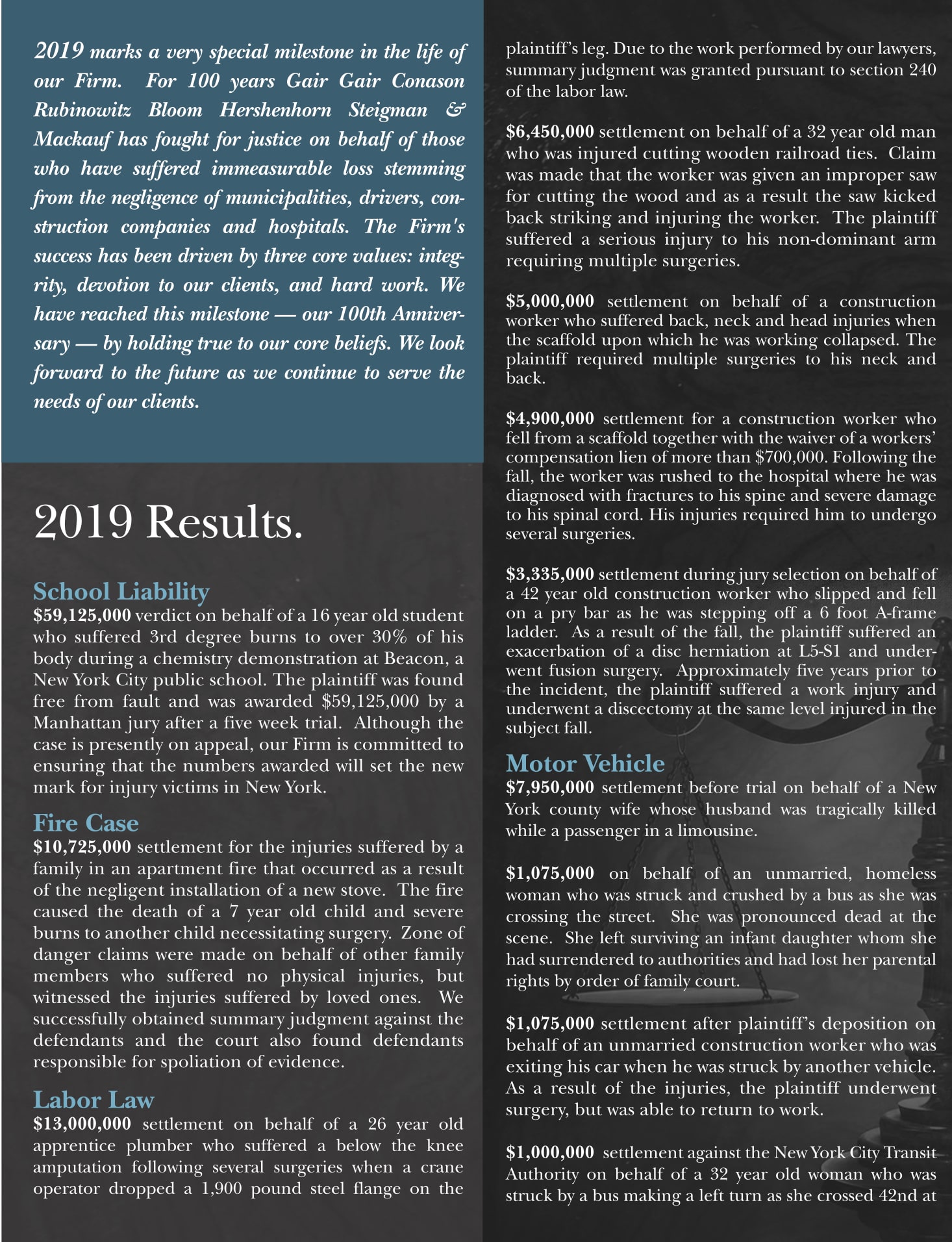 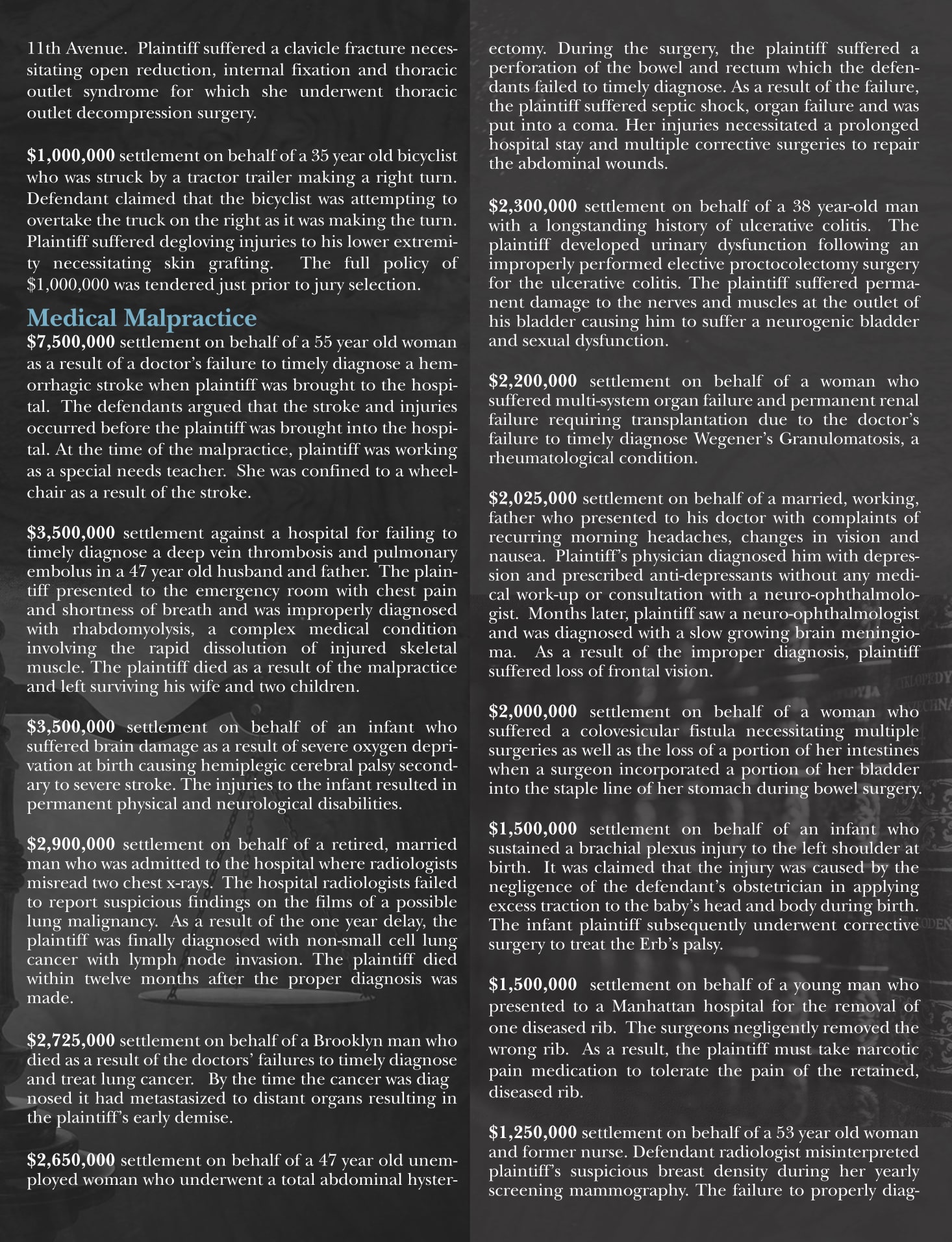 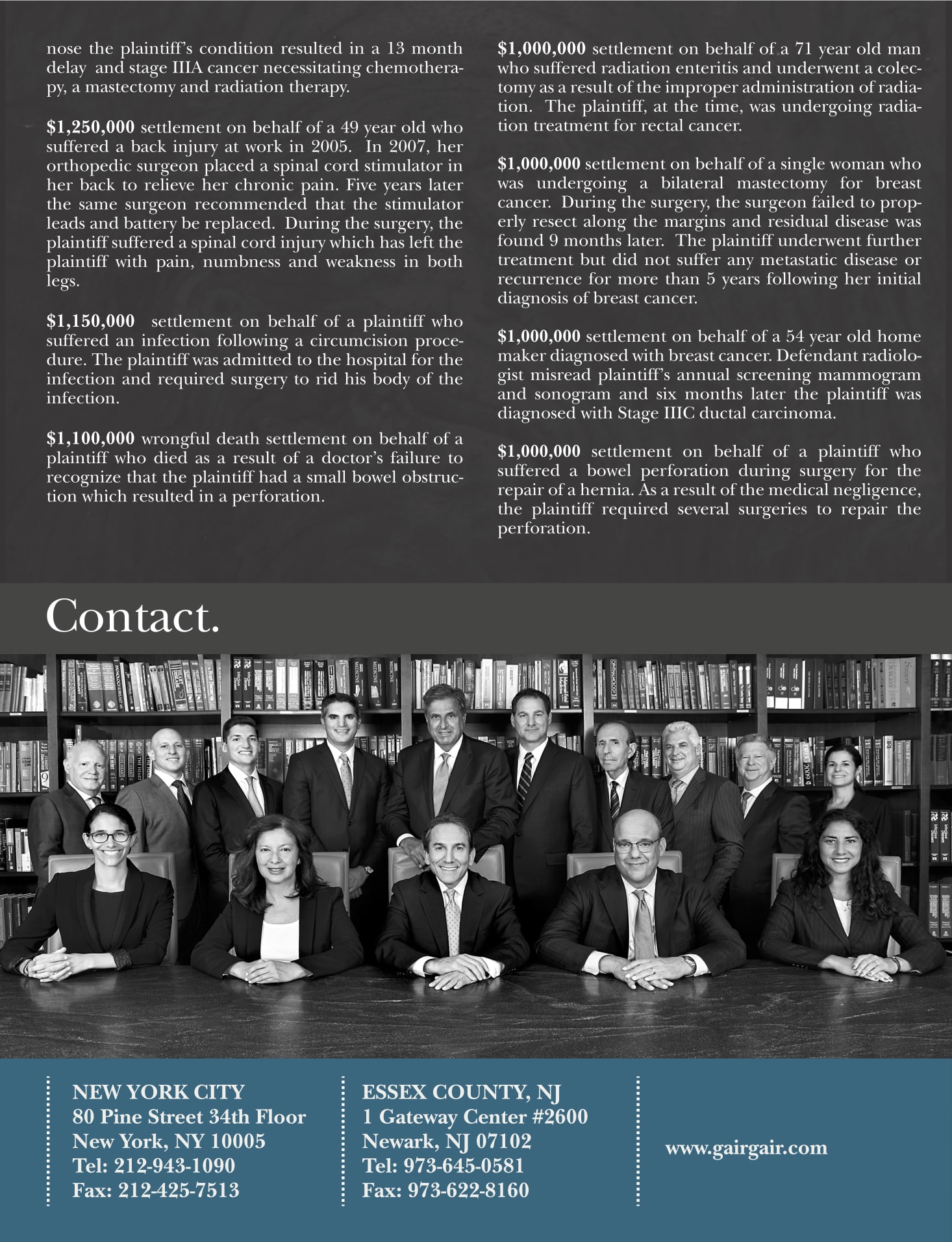 2019 Newsletter - 4
❮ ❯
Newsletter 2019 Click Here to Open
Client Reviews
★★★★★
"Very compassionate, very efficient and top rate! If you want a team of good lawyers that will not only work hard to win your case but knows how to listen and feel for you as a victim of medical malpractice, this firm is your only choice. Anthony Gair, was always there for us all throughout the case albeit the distance from NY to Manila! Words cannot express how thankful we are to him and his team. Thanks a million!" D.F.
★★★★★
"Everyone I communicated with at this firm made me feel like I was part of their family. My needs, feelings, and concerns were carefully considered and given the needed attention. My counselors were available whenever I needed them and became my personal friends. They came highly recommended and lived up to their reputation. I would recommend them to any of my friends without hesitation. This firm gives attorneys a "good name". Clients matter here. They made me feel like I mattered as a person, that I was valued, and not just a possible source of income for the firm. They earned their fees, and you will find that they will also earn your trust." N.W.
★★★★★
I met Diana Carnemolla and Howard S. Hershenhorn during the darkest time of our lives, when my husband was in a coma with very little chances to survive, due to a car accident. The compassion and professionalism that they showed myself and my family during such a difficult time combined with an incredible willingness to get the best results for us have shown us that we had made the absolute best choice. They not only fought extremely hard for what proved to be a very difficult case, but they also emotionally helped us through this incredible ordeal and have been a caring advocate for our family and our case. They got us the best results we could have expected given the circumstances and didn't give up when things got more challenging. We would absolutely recommend their Law Firm to handle the toughest of cases while providing such a great deal of personal support. Diana proved to be personally invested in our case ultimately seeking the best outcome for our family. We cannot thank them enough for what they have done for us. V.P.
★★★★★
"I’m very impressed by the professional services of this law firm Gair Gair Conason. Most importantly Diana M.A. Carnemolla, Esq. She performed impeccable work ethics and professionalism whole time throughout, with her constant follow ups and communication skills, for that I’m very appreciative of. August 2020, my mother was in a horrific car accident. I contacted Gair Gair Conason to handle my mother's case. Everyone at the firm who helped us with the case did such a fantastic job with being so efficient. We could not have been more satisfied with the services we received. Diana M.A. Carnemolla, Esq. was so fast, quick answer for every question that we asked and gave us honest information about the possibilities concerning the case. She resolved our case much faster that I would expect. Thank you so much! I am very happy with this law firm. Especially the outcome from it all and how easy they helped make it be for us. We had a tough case to fight regarding the incident with the other driver, thankfully it all worked out in my mothers best interest. Diana M.A. Carnemolla helped us settle our case easily, helped us get out of it with a much needed win. I’m surprised it wasn’t as bad of experience as I thought it would be. We were pretty worried in the beginning with much thanks to this team they’ve helped solve this for my mother and put much of my worries as well as my mothers to ease. Thank you again from my family to your whole team for an awesome job!! I would highly recommend this law office to anyone in need of outstanding representation." K.C.
View More
Submit a Law Firm Client Review
Contact Us