Were You or a Loved One the Victim of a Misdiagnosis in the Emergency Room of a NY Hospital? 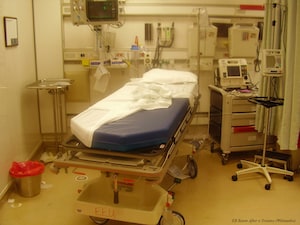 The Emergency Room Malpractice Attorneys at Gair, Gair, Conason, Rubinowitz, Bloom, Hershenhorn, Steigman & Mackauf work with qualified expert in the medical profession to help victims of ER errors recover maximum compensation so they can afford the care they need to recover.

Unfortunately, the stressful and fast pace environment of the Emergency Room can have detrimental consequences on patients as mistakes happen. Common ER Malpractice include but are not limited to:

Can I Sue The Emergency Room in New York?

If you suffered great harm or a loved one died because of ER Malpractice, you are entitled to compensation and you should consult with an experienced Medical Malpractice Attorney. Our NYC Emergency Room Misdiagnosis Attorneys recently achieved a settlement of $2,400,000 on the eve of trial in an Emergency Room malpractice wrongful death case involving the failure to timely diagnose and treat a splenic injury following a work-related accident. As a result of the failure of the defendants to timely recognize and treat the splenic injury, the decedent suffered a splenic rupture, massive intra-abdominal bleeding, sepsis, respiratory distress, and multi-system organ failure which ultimately led to his untimely but preventable demise. Through our attorneys' command of the medicine, thorough and complete investigation and discovery, rigorous examination of the defendants at deposition, retention of highly qualified experts, and unwillingness to resolve the case for anything less than full value, we obtained justice for our client. While the monetary award does not bring her husband back, it will provide security for her and her family for the future.

Splenic injuries are among the most frequent trauma related injuries, usually the result of blunt abdominal trauma. Symptoms of a splenic injury can vary and are dependent upon the type and extent of the injury to the spleen, as well as the extent of the associated internal hemorrhage. The diagnosis and prompt treatment of potentially life-threating hemorrhage is the primary goal of treatment. An undiagnosed splenic injury can result in splenic rupture, internal bleeding, multi-system organ failure, and/or death however with timely diagnosis and treatment, these life-threatening injuries are both predictable and preventable.

The spleen is a vital organ which plays multiple supporting roles in the body, including acting as a filter for blood as part of the immune system, fighting off certain kinds of bacteria, and the exchange of oxygen and carbon dioxide in the cells. Coffee bean shaped, it is located in the left upper quadrant of the abdomen, beneath the left hemidiaphragm and above the stomach, and is protected by the left 9th through 11 th ribs. It is generally not palpable as it lies deep in the rib cage, therefore the diagnosis of any injury to the spleen must be made by a full, complete, and thorough physical examination and medical history, laboratory studies, and a CT scan of the abdomen and pelvis.

Injuries to the spleen vary in location and degree. The spleen is entirely covered by a layer of tissue called the splenic capsule, which helps to protect the spleen from direct injury. A splenic rupture is an emergency medical condition that occurs when the splenic capsule breaks open, releasing blood into the abdominal cavity. The degree of blood is dependent upon the size and extent of the rupture. Treatment of a splenic rupture, if timely diagnosed, depends on the severity of the rupture. Low grade splenic ruptures may heal on their own while a patient is monitored in a hospital, while more serious ruptures require either repair of the torn portion of the spleen or removal of the entire spleen, known as a splenectomy, a laparoscopic surgery. While we can live without a spleen, living without the organ puts a patient at an increased risk of infection. The alternative however, to an untimely diagnosed and treated splenic injury, can result in untimely death as it did in this case.

The signs and symptoms of a splenic rupture can vary, depending on whether the spleen has ruptured, and usually but not always cause abdominal pain. The severity and location of the pain depends on the extent of the injury. Symptoms are often accompanied by other signs of injury caused by blunt trauma, for example the rib fractures that lie anteriorly to and protect the spleen. Internal bleeding caused by the ruptured spleen can cause confusion, blurred vision, fainting, and signs of shock.

What are The Consequences of Emergency Room Misdiagnosis?

Emergency room misdiagnosis can lead to serious injury and sometimes death. When a patient is misdiagnosed, he or she might not receive the appropriate treatment or receive the wrong treatment which may result in further harm or be fatal. He or she might be sent home while they should have been sent to a specialist or treated immediately.

Our client was a 53 year-old married father of two college-aged children working as a mechanic for the NYC Transit Authority. After falling several feet from a ladder he ascended to fix a train car, the left side of his body landed on an air compressor that was in the pit of the work area. His complaints, as documented in the ER record, included pain to the left ribs and from the waist down after falling several feet from a ladder onto an air compressor. His pain scale as documented in the ER record was 8 out of 10, considered very severe pain, with left lateral tenderness upon palpation. An x-ray of his chest revealed what was described as a mild deformity of the left 10 th and 11th ribs which "may" have been recent. The decedent was diagnosed with a fractured rib, told the pain would get worse before it got better, and told to follow up with his PCP in two days.

Our client worsened from his undiagnosed and untreated injuries over the next two days and presented again to the ER. By this time however, his spleen had completely ruptured and was bleeding profusely into his abdominal cavity, his lung had collapsed, he was in hypovolemic shock, and his organs had begun to shut down. Despite timely, life-saving efforts, our client died several days later from complications associated with his undiagnosed and untreated splenic injury.

The defense chose to highlight those portions of the medical record that demonstrated what was done in the ER, rather than what wasn't done. They attempted to point to the fact that while in the ER, our client exhibited normal vital signs and oxygen saturation, did not appear to be ill, and had a normal abdominal exam without any tenderness, rebounding, rigidity, or guarding, while ignoring that his pain was documented by the ER nurse to be 8 out of 10 on the pain, considered to be severe pain, and to be exacerbated by movement, breathing, and lifting. They highlighted the fact that urinalysis was performed, and reported as normal, but ignored the fact that no blood testing of any type was done, including a CBC with hematocrit and white blood cell count and platelets, and blood chemistries including creatinine, all of which the standard of care required to rule out an intra-abdominal injury such as splenic injury. They attempted to defend their inactions by claiming that an X-ray of the chest was performed, which showed an acute (recent) fracture of the rib, but ignored a basic yet fundamental principle of medicine, i.e. that an injury to the spleen can only be diagnosed from a CT scan of the abdomen, the gold standard of diagnosing such injuries. Moreover, they failed to recognize that the blunt injury to our client's left side was a tell-tale sign that should have raised the index of suspicion for a splenic injury, as the fall concentrated the vector of forces onto the left ribs, which would increase the likelihood of left rib fractures and splenic injury.

Most significantly, the defendants unsuccessfully attempted to defend their inactions by claiming that the decedent's spleen had not yet ruptured while he was in ER but rather, ruptured within the two days following his discharge from ER. What the defendants and their experts did not prepare for was that by conceding that the decedent's spleen had not ruptured while he was in the ER was concrete evidence that a) explained the normal vital signs and abdominal exam and b) explained the absence of sequelae consistent with internal bleeding and c) established uncontrovertibly that timely diagnosis and treatment of the decedent's splenic injury would have allowed for conservative management of his splenic injury, without the need for any surgical intervention.

The defendants spent just 1 hour and 13 minutes with our client in the ER, despite his presentation of classic signs and symptoms of a potentially life-threatening splenic injury including blunt trauma to his lower chest, pain to the left rib and waist down, left lateral mild tenderness with palpation, and rib films showing fractures of the left 10th and 11th ribs. Despite this obvious presentation, the defendants failed to provide decedent with even the most basic of medical interventions including blood work and a CT scan of the abdomen to rule out an intrabdominal injury

Do I Need a Lawyer to Sue an Emergency Room for Malpractice?

For a victim of an Emergency Room Misdiagnosis to get full compensation, the choice of an experienced and skilled Medical Malpractice Lawyer is key. Hiring a top law firm will also assure that qualified medical experts will be hired to prove your case and obtained the compensation you deserve.

In this case, our firm retained nationally recognized experts in the fields of Emergency Medicine, Radiology, and Critical Care who each opined that the defendants departed from good and accepted standards of care in failing to timely diagnose and treat the decedent's splenic injury, and that those departures were the proximate cause of the decedent's horrific pain and suffering and untimely death. A trial date was set and the case was thoroughly prepared by our trial attorneys. When defense counsel recognized that our firm was prepared and ready to fully litigate the case to verdict, an offer of settlement was made. The quality of our experts, vigorous cross-examination of the defendants at deposition, and meticulous preparation for trial were no match for the indefensible actions of the defendants. Negotiations continued through the eve of trial, until a settlement was achieved that fully compensated our client and her children for the immeasurable loss they endured at the hands of the defendants.

The NYC Emergency Room Negligence Attorneys have more than 100 years of experience representing victims who have been injured or died as the result of a negligent a doctor, a nurse or other healthcare practitioner. If you believe you or a love were the victim of ER Malpractice, please contact our firm for a free consultation.