Firm Operations Continue Uninterrupted During the Coronavirus. Click for More Information ›
Home
Practice Areas
Are you looking for a New York Medical Malpractice Lawyer Near You?
Misdiagnosis Lawyer NYC
Failure to Diagnose or Treat Influenza

Failure to Diagnose or Treat Influenza 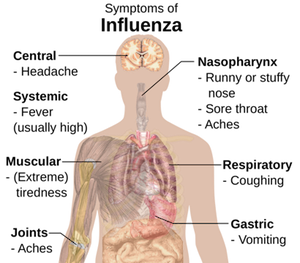 Influenza is an acute respiratory illness caused by flu viruses. There are 3 types of influenza viruses: A, B and C. Human Influenza A and B viruses are those that cause seasonal epidemics in winder months across the United States. Influenza A viruses are divided into subtypes based on two proteins on the surface of the virus; one of those is the H1N1 subtype which caused a national epidemic in the Spring of 2009, when the virus emerged to cause devastating illness, and death, to those affected1.

Flu viruses enter the body through the mucas membranes of the nose, eyes or mouth, making the influenza virus extremely contagious. Influenza is very different from a cold. Onset of symptoms is usually abrupt with signs and symptoms of upper and/or lower respiratory tract involvement2. In addition, indications of systemic illness such as fever, headache, myalgia, and weakness can also be present3. As symptoms of influenza vary from person to person, influenza must be included in the differential diagnosis when influenza-like illness is present. Influenza-like illness is defined as fever (temperature of 100F or higher) coupled with cough and/or sore throat in the absence of a known cause other than influenza4.

Most people affected with influenza will recover in a few days to less than two (2) weeks. Influenza can cause mild to severe illness. If allowed to progress and left untreated however, influenza can be a serious and potentially fatal condition. Complications of influenza include bronchitis, pneumonia, bacterial infection, respiratory failure, Acute Respiratory Distress Syndrom (ARDS), lung failure, mechanical ventilation, multi-system organ failure, prolonged hospitalizations, immobilization and immobilization-related issues such as joint contractures, and ultimately death.

While anyone can get the flu, certain people are at a greater risk of developing serious flu-related complications if they get sick. This includes children five (5) years of age or less, adults sixty-five (65) years of age or older, and people with certain chronic medical conditions (eg. obesity, asthma, diabetes or heart disease)5.

In addition, there are certain people who present with progressive, severe or complicated influenza. Progress illness is characterized by typical symptoms plus signs or symptoms, such as chest pain, poor oxygenation, severe dehydration, or other exacerbations of chronic conditions6. Severe or complicated illness is characterized by signs of lower respiratory tract disease, central nervous system findings, complications of hypotension, myocarditis or rhabdomyolysis, or invasive secondary bacterial infection7.

When initiated promptly, treatment of influenza with anti-viral medications (Tamiflu, Relenza, etc.) can shorten the duration of symptoms, and reduce the severity and incidence of complications of the flu and flu associated death8. In otherwise healthy patients who are not at risk for developing complications of influenza, or who do not present with severe, progressive, or complicated illness, treatment with anti-viral therapy is most effective if administered within forty-eight (48) hours of symptom onset. In all other patients however, treatment with anti-viral therapy must be administered as soon as possible, regardless of time of symptom onset.

IF A DOCTOR FAILED TO DIAGNOSE INFLUENZA OUR NYC MEDICAL MALPRACTICE LAWYERS CAN HELP
Gair, Gair, Conason, Rubinowitz, Hershenhorn, Bloom, Steigman & Mackauf  has a unique team of sophisticated physicians and attorneys who specialize in careful analysis of medical malpractice cases, allowing us to carefully review every fact to develop a winning “theory of the case.”  We truly believe this sets our firm apart, in our ability to overcome challenges in fighting for clients who have suffered in the course of negligent treatment by trusted medical providers.

Our firm recently achieved a settlement of $1.65 million in a complicated medical malpractice case involving failure to diagnose the flu, which developed into life-threatening pneumonia requiring an extended stay in the Intensive Care Unit (ICU) – as a result of which our client ended up with severe difficulty and pain walking after being confined to his ICU bed and essentially immobilized for nine weeks.  As described below, our dedicated team of physicians and attorneys investigated this case from every angle to develop our successful theory.

In this case, we represented a 48 year-old man who experienced an acute onset of fever, cough and body aches one afternoon in mid-March.  After our client called his primary care doctor the next morning and reported a 102.5 fever, increasing cough, severe body aches, and feeling like “the flu,” his doctor responded that it was unlikely to be the flu so late (past) the flu season and, rather, was more likely an upper respiratory infection.  The doctor started him on antibiotic, cough syrup and Tylenol.

After our client felt worse over the next two days, he called the doctor back and was sent for a chest x-ray which showed “bronchitis.”  The following day, when our client’s condition worsened, his doctor told him to take a different antibiotic; but after only one dose of the new medication, he felt so badly that he decided to go to the Emergency Room (ER).

When our client arrived at the ER with a 103.2 degree fever, he was having difficulty breathing.  A repeat chest x-ray was suspicious for early pneumonia.  Because of his difficulty breathing (with a decreasing blood oxygen level), he was admitted to the ICU in isolation on multiple intravenous antibiotics as well as Tamiflu (a drug used to treat influenza) because, at that point, it was uncertain what caused his severe deterioration over the few days.  Due to his progressing respiratory failure, our client was intubated (a tube placed in his trachea or “breathing pipe” so that he could be connected to a respirator).  Tests came back with evidence that he indeed had influenza, possibly complicated by a bacterial “superinfection” (a known complication of the flu, and the most common cause of death among the small percentage of patients in which the flu proves to be fatal).

Meanwhile, our client also developed evidence of “critical illness myopathy,” a condition that is sometimes seen in patients confined to an ICU in which there is muscular deterioration.  The plan was to keep him as mobile as possible with range of motion exercises; however, this could only be performed to a limited extent under ICU conditions.  Our client also developed other complications, including kidney failure, decreased mental function, and some mild skin breakdown.

Finally, after some nine weeks in the hospital, our client was discharged to a rehabilitation facility with the plan to help recondition his muscular status.  While the hospital had managed to save his life from a very severe and complicated medical course, he left the hospital with severely stiff legs.  Our client experienced tremendous difficulty in bending his knee and hip joints, with his thighs in particular being tight and atrophied.  When a physical therapist attempted to more aggressively exercise his knees and hips, the thighs became swollen and tender; this was due to bleeding in his thigh muscles which, on further analysis, was due to development of a rare condition known as “myositis ossificans,” where bone-like material develops within the muscle (calcification), making it extremely stiff and immobilized.  The bleeding was thought to have occurred because of overzealous efforts by the therapist to move the calcified muscle, causing severe trauma to the muscle.

Our client, thus, was severely injured due to the combination of insufficient therapy during his ICU stay and over-aggressive therapy after his hospital discharge, and was essentially left crippled by his treatment by the hospital and the rehab facility.

Our Successful Theory of the Case

In this case, we located appropriate expert physicians and asked whether, had our client been properly treated in the ICU, this would have prevented development of the myositis ossificans (bony calcification of the muscle).  Our medical misdianosis lawyers were well aware of various challenges in this case including that because our client’s condition is so rarely seen there is, technically, no precise protocol to “prevent” it.  Also, the standard treatment provided at the hospital (in and of itself) did not reflect negligence which caused our client’s injury in this case.  Furthermore, the rarity (and unexpected presence) of his condition made the diagnosis one that was only reasonably made in retrospect; the efforts to mobilize the patient’s knee and hip were generally considered proper and appropriate (again, not clearly a departure from the standard of care).

But the severity of the patient’s injury were such that our malpractice attorneys knew that we must further investigate the circumstances leading to these injuries.  In this situation, knowing where to look and what questions need to be considered are of the greatest importance.  We are fortunate to have that expertise at Gair, Gair, Conason, Rubinowitz, Hershenhorn, Bloom, Steigman & Mackauf .

So, why did the patient need such long and intense treatment in the ICU in the first place?  Could something have been done (or not done) that would most likely have changed the course of the events and their tragic outcome?  Starting from the very beginning of each case, we look at every act and every alternative to examine for possible departures from performing an appropriate standard of care.

Here, our client presented to his physician with approximately 24 hours of fevers, severe body aches and cough.  Certainly, these symptoms are consistent with influenza and, though the treating physician believed otherwise, were still within the season in which flu must be considered in the differential diagnosis.  Therefore, the treating physician’s failure to consider such diagnosis departed from the standard of care.  In not considering this diagnosis, the physician did not even consider testing our client for the flu, nor did he consider empiric treatment with a standard flu treatment (such as Tamiflu).  This would have been the standard treatment (to be given within 72 hours of developing symptoms) for a patient with symptoms suggestive of the flu during flu season.  And such treatment, if given early enough (24 hours in this case was certainly within the standard 72 hours) will frequently result in improvement and will prevent worsening of the symptoms.  Additionally, it turns out that this physician had not even offered our client a flu vaccine, making the diagnosis more likely (and increasing the possibility of our client developing the flu in the first place.)

Thus our meticulous investigation led to the development of a theory which our expert physician agreed was a departure from the standard of care, and likely led to the severity and progression of the flu infection – which caused the worsening respiratory condition, the need for the ICU admission, and all of the complications resulted from the long ICU admission, including the myositis ossificans and our client’s additional suffering from bleeding into the muscle.  This case ultimately resulted in a settlement of $ 1.65 million dollars for this plaintiff.
Failure to timely diagnose and treat influenza may constitute medical malpractice. If you or a family member developed serious complications from influenza that was not timely diagnosed, please contact our firm to discuss your case with a New York Medical Malpractice Lawyer.

1 Recommendations of the Advisory Committee on Immunization Practices; Center for Disease Control and Prevention. January 21, 2011.

4 Recommendations of the Advisory Committee on Immunization Practices; Center for Disease Control and Prevention. January 21, 2011.