For the last 100 years, the New York Personal Injury Lawyers at Gair, Gair, Conason, Rubinowitz, Bloom, Hershenhorn, Steigman & Mackauf have represented clients who have suffered serious personal injury or death as a result of other people’s negligence. Since our firm is selective in the cases that we agree to handle we put in all of the time and money that is required to maximize the ultimate recovery for the injury suffered and believe that over the years our results are unsurpassed. Call us at 212-943-1090 for a free consultation.

Last August, a judge upheld a personal injury verdict of almost $60 million that our attorneys obtained for a young man who suffered devastating injuries during a botched chemistry demonstration at a NYC High School. The verdict was also the #1 School Injury verdict in NY State in 2019. The victim was a 16 year old boy who was burned alive and spent months in hospitals undergoing very painful treatments. Sadly, he will never fully recover and will have to deal with physical and emotional pain and suffering during the rest of his life.

In December 2018, our NY injury attorneys obtained an $85 million verdict for a pedestrian who suffered catastrophic injury after being hit by a tour bus in Manhattan. This verdict is the highest verdict awarded by a jury in New York State and the 25th highest in the US in 2018. The victim was awarded by the Manhattan Supreme Court jury $45 million for past pain and suffering and $40 million for future pain and suffering. The 54 year old pedestrian was in the crosswalk with the light in his favor when a red double decker sightseeing bus tour struck him and seriously injured him. He spent 78 days in the hospital and sustained 11 operations. The victim is now able to walk with a brace but will sustain constant pain for the rest of his life.

A few month earlier, in September 2018, our personal injury lawyers obtained $27.5 million sex abuse settlement paid by the Brooklyn Diocese. This is one of the highest settlement paid in the country by the catholic church for clergy abuse and sexual abuse. 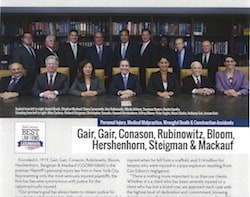 Nine of our attorneys have been listed in the 2022 Best Lawyers in America as seen in New York Magazine: Ben Rubinowitz, Jeffrey Bloom, Anthony Gair, Howard Hershenhorn, Richard Steigman, Marijo Adimey, Christopher J. Donadio, Diana M. A. Carnemolla and Allan Zelikovic have all been recognized as Best Lawyers and each of these attorneys have achieved multi-million dollar recoveries on behalf of their clients in personal injury cases. 3 of our young attorneys (Rachel Jacobs, David H. Larkin and James Rubinowitz) were included in the 2022 list of the Best Lawyers, Ones to Watch. Recently Best Lawyers named Richard Steigman New York Medical Malpractice Lawyer of the Year 2022, Howard Hershenhorn NYC Personal Injury Lawyer of the Year 2020 and Ben Rubinowitz as one of the Top 10 Lawyers in New York City.

Our firm is highly experienced in handling personal injury involving:

How Do I Know if I Have a Personal Injury Case?

If you have been injured as the result of the negligence of another person or entity, liability and the damages are the two main bases to establish if you have a case. In order to file a personal injury claim in New York, the plaintiff must be able to prove that the defendant is liable for the injuries and if so what are the nature and the extent of the damages. If these two elements can be proven you may have a case and we recommend you contact a personal injury lawyer to discuss it.

What Damages are Subject to Compensation in a NY Personal Injury Case?

While every case is different, the most common damages claimed in a New York personal injury lawsuit are the pain and suffering endured as a result of the injury, the loss of wages related to the injury and medical expenses (current and future).

How is the Pain and Suffering Compensated in a Personal Injury Claim in New York?

How Much Does a Consultation With a NYC Personal Injury Attorney Cost?

How Can a Personal Injury Lawyer Help?

Throughout the years, our personal injury attorneys have successfully represented individuals and families in New York who suffered injury by the negligence or recklessness of others and we understand how devastating and overwhelming it can be to deal with mounting costs and suffering caused by serious personal injury. We retain the very best experts including accident reconstructionists, biomechanical engineers, medical doctors, forensic pathologists, economists and other experts from the various disciplines involved in the case because every personal injury case requires the plaintiff to prove both liability and damages. Each case has its own set of associated costs, including pain and suffering, lost wages, the cost of care and many other monetary costs and these must be clearly demonstrated. Our trial lawyers will document and preserve any evidence necessary to prove your case and meticulously prepare your case for trial.

How Can Social Media Affect Your Personal Injury Case?

Social media can have a devastating effect on the outcome of your case. Anything that you post on social media while your case is ongoing can be used against you by the defense attorney. We always ask our clients not to discuss their case on social media and avoid posting pictures of their activities while their cases are ongoing. You should also be mindful of what your family and friends are saying or posting about you on social media.

What are Some of the Recent Personal Injury Verdicts and Settlements Obtained by the Attorneys at Gair, Gair, Conason, Rubinowitz, Bloom, Hershenhorn, Steigman & Mackauf?

At Gair, Gair, Conason, Rubinowitz, Bloom, Hershenhorn, Steigman & Mackauf, our NYC Personal Injury Lawyers have excellent reviews and aggressively work to help you and your family pursue compensation for your injuries. If you have been injured due to the negligence of another, please contact our firm to discuss your case. 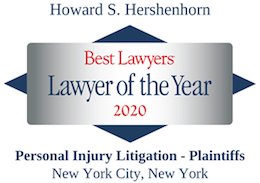 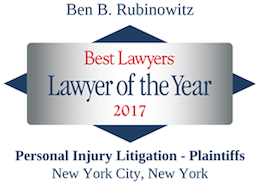 Our NY personal injury attorneys obtained the #1 jury verdict in New York State for a pedestrian who suffered catastrophic injury in a bus accident. The verdict is also the 25th highest jury verdict in the US in 2018.

Featured Client Review
Dani J. In the face of injustice, the most important thing is someone you can turn to for the best legal advice and representation in the world. Someone you can trust... that's the hardest working team of Gair, Gair,Conason, Steigman, Mackauf, Bloom, & Rubinowitz. This law firm is the creme de la creme, and definitely gives you the best kind attention and care that is so very important when dealing with the difficult aftermath and happenstances of life and health. My case was particularly difficult to solve and stumped another law firm for over 16 months until they finally gave up.
Fortunately enough, I was able to speak with Mr.Rubinowitz and Mr.Saghir, and they reassured me that they would try their very best to do right by me, and help me get the justice I deserved, and they did! They went way way way above and beyond the call of duty and were instrumental in changing the course of my Life. I cannot thank them enough for their unwavering hope, help, hard work and determination. If you're in need of legal representation, my recommendation, hands-down, would be the best law firm out there: Gair, Gair, Conason, Steigman, Mackauf, Bloom, & Rubinowitz. With them, you will feel confident! Good luck & all the best.
★★★★★