Did a Loved One Die or Were You Injured in a Garbage Truck or in a Dump Truck Accident? 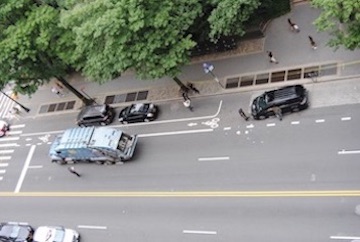 The New York Garbage Truck Accident Attorneys at Gair, Gair, Conason, Rubinowitz, Bloom Hershenhorn, Steigman and Mackauf have more than 100 years of experience litigating commercial truck accidents. They are known for meticulously preparing their cases in order to obtain full financial recovery for their clients.

Our attorneys recently achieved a substantial settlement in a Dump Truck Accident Lawsuit involving a six-vehicle collision that caused the death of a 58 year-old single mother. This mother, who had been employed full-time as a caretaker for another family, was the sole financial provider for our client (her daughter) and had significant financial responsibilities as to her granddaughter.

Upon arrival, the State Police found the vehicle driven by our client’s mother still engulfed in flames and its occupants burning therein. Attempts to remove our client’s mother were unsuccessful given the extent of flames from the vehicle. Our client’s mother was pronounced dead at the scene of the incident. An autopsy revealed extensive charring of her body peri and postmortem, a transection of her spinal cord, a laceration of the thoracic aorta, a subarachnoid hemorrhage of the brain, a laceration of the liver and abdominal soft tissue contusions, and bilateral contusion of the lungs. The cause of her death was multiple blunt impact and thermal injuries.

What Type of Experts Are Retained in a Truck Accident Lawsuit?

Every truck accident case is different. Our attorneys will retain the best truck accident experts to support your case. Having handled numerous truck accident lawsuits we have relationships with experts who have vast experience in analyzing these accidents. We work with these Forensic Engineering Expert Witnesses who will examine the cause of the accident and provide the proof that the driver of the truck caused the accident. In fatal truck accident cases we also commonly hire a forensic pathologist who will determine the cause and manner of death of our client. We also retain expert accountants, financial analysts and economists to accurately assess our clients’ compensation.

In the case described above, our firm retained, as an expert, a forensic engineer who opined that the dump truck driver was the sole cause of the incident. Although the truck driver stated (at the scene of the incident) that our client’s mother cut off his truck, causing him to have insufficient time to brake before crashing into her vehicle, our expert opined that no physical evidence supported such a self-serving statement.

In addition, an investigation by the State Police Crash Investigation Team revealed the absence of any brake or skid marks from the garbage truck – and no other indication that the dump truck driver made any attempt to slow his truck from its normal rate of speed before crashing into our client’s mother. The State Police determined that this collision was caused by the dump truck driver’s failure to observe the slower moving traffic in front of him and failure to slow down in a timely manner.

How Can Victims of Truck Accident Be Compensated If the Insurance Coverage Is Limited?

Unfortunately, many commercial garbage truck companies try to cut costs to optimize their profits and as a result they often have a limited accident insurance coverage available for victims. If the defendant owns significant assets our firm may ask the defendant to pay a personal contribution to compensate victims of accidents.

In the case discussed here, the defendants disclosed that there was limited coverage available for, not only our client’s claim, but claims brought by the two other occupants of her mother’s vehicle – the second of two tragedies in this matter. As there was hardly adequate coverage for all of these claims, our firm advised defense counsel that given the significant assets owned by the defendant company (including dozens of Mack trucks, multiple buildings), it was expected that the defendants make a personal contribution to the families of these victims to compensate for their horrific loss.

The defendants requested a private mediation, where they then argued there was comparative liability and little damages. We told the mediator that, if defendants were not prepared to pay a substantial sum, we did not see any point in continuing the mediation.

After many hours of mediation, our firm reached a favorable settlement as a result of our meticulous preparation of the case, which included working closely with our expert forensic engineer and forensic pathologist, and the expertise of our skilled attorneys in the area of personal injury. Given the complexity of our client’s case, this was an exceptional result. It demonstrates the need for meticulous preparation of these intricate cases which our firm is known for.

At Gair,Gair, Conason, Rubinowitz, Bloom, Herhsenhorn, Steigman and Mackauf, our truck accident attorneys thoroughly prepare every case they accept in the same manner. Each case is prepared as if it is going to trial. We believe firmly in the adage that cases which are prepared to be tried are usually settled while cases which are merely prepared to be settled are tried. We thus spare no expense in preparing all our cases. If you were injured in a dump truck accident or in a garbage truck accident, please contact our firm to discuss your case.