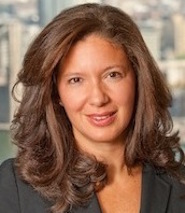 She always had our best interest at heart and fought to the very end for what was right which resulted in a settlement we never imagined could be achieved. Diana was always supportive and compassionate to my young daughter and myself during our darkest days. Diana is very understanding and most important always was there for us when we needed her. Because of Diana and how she handled our case from beginning to its settlement, our lives changed for the better. We will always be thankful for her. - Jason F., former client

Diana Carnemolla is lauded as one of New York’s Top Verdicts & Settlements lawyers, a prestigious honor and distinction in recognition of her unparalleled representation and resolution of her clients’ cases. Recognized for her outstanding competency as a distinguished litigator, Diana is one of only three women to have been elected equity partner in the firm’s distinguished 100 years of service. In addition, Diana has been recognized as a Super Lawyer in the New York Metro area since 2016. In the decades Diana has been at GG&C, she has handled numerous personal injury cases, including motor vehicle accidents, labor law claims, and medical negligence, that resulted in recoveries of multi-millions of dollars.

Diana has been a successful and tireless advocate for her clients who have suffered tremendous injuries and loss. In December 1989, before graduating from college and earning her Bachelor of Science Degree in less than three and a half years, Diana was hired at GG&C to work with trial attorneys to prepare cases and trials. For the next three years Diana honed her skills working on trials, preparing experts, drafting motions and supervising all phases of discovery when she decided to pursue a law degree in the evening while continuing to work full time at the GG&C law firm. As a first generation American whose family immigrated from South America, Diana aspired to be an attorney to help individuals in need of legal representation who might not otherwise be able to understand their legal rights such as victims who suffered personal injury or had a loved one who did. Diana is the only attorney in the history of the firm to attend a law school night program while continuing her full time employment at GG&C working with attorneys who would later become her partners.

Upon graduation from law school and being admitted to practice law in New York and New Jersey, Diana was hired as an associate attorney at GG&C. Diana is well known for her thorough preparation of her cases. She is extremely meticulous with preparing her clients for their pre-trial deposition and recognized by medical experts and defense counsel for her thoroughness when deposing defendants, especially in medical malpractice cases. When working with her clients, Diana recognizes that each client has different needs and devotes as much time needed so they are comfortable, well informed and ready when questioned by defense attorneys. In 2010 Diana became a GG&C partner and in 2016 she was elected equity partner, a prestigious position held by only two other females in the history of the law firm.

Diana has been a second chair trial attorney in cases that have resulted in outstanding results including an $85 million in New York county Supreme Court jury verdict for a pedestrian who was struck by a bus. This was the largest verdict of its kind in New York City. Her perseverance and work ethic, along with her knowledge of all aspects of pre-trial preparation of complex medical malpractice cases and major injury litigation have resulted in settlements which include $8.5 million for failure to properly monitor and deliver a mother’s infant before his birth; $8.25 million for wrongful death and conscious pain and suffering caused by failure to diagnose and treat patient’s acute myocardial infarction; $8 million for wrongful death arising from a drunk driving accident resulting in severe suffering to plaintiff’s child and the death of his pregnant wife; $7 million for wrongful death caused by failure to properly perform the patient’s emergency Cesarean section; $4.9 million for severe injuries to the plaintiff pedestrian hit by a bus as she crossed within the crosswalk.

A physician recommended Diana as the best, compassionate counsel possible. “I felt she viscerally understood my raw pain, rage and sense of devastation. We felt completely at ease, even during the rough times. Diana maintained her composure and more importantly kept me from losing my mind and hope.” -Mary F., former client

Diana is also recognized by her clients for being compassionate and supportive. Her sensitivity to, and empathy for, her clients and their families has made the often times stressful situation an easier one to bear. Diana’s ability to communicate with her clients and address their concerns provides a constant source of comfort and security upon which they have come to rely.

“I take pride in being a zealous advocate for my clients, I see it as part of my representative responsibility to treat my clients with respect and dignity, and to dedicate myself to their representation. It is an honor and responsibility that is profound to me. Through my experience, knowledge and resources I devote myself to achieve the greatest successful resolution for my clients at trial or pre-trial settlement so that they can move forward and focus on enjoying a better life.” - Diana M.A. Carnemolla, Esq.

On behalf of the Altman family, I would like to express our deepest gratitude to the entire firm for the outstanding and excellent representation in the case of my wife Stephanie, who experienced a devastating stroke as a result of medical malpractice.

From our first meeting with the firm until the settlement we found them to be extremely caring and solicitous to our needs. Everyone we worked with was responsive and sensitive to any questions we had.

I would like to specifically mention Howard Hershenhorn and Diana Carnemolla who represented us in a truly professional manner and proved to be outstanding representatives for us in a very complicated case.

It was a pleasure working with a firm that dealt with our needs in such a caring and compassionate fashion. 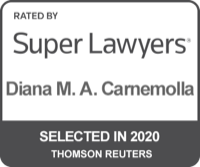 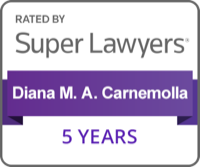