Were You Injured in a Collision with a MTA Bus in NYC? 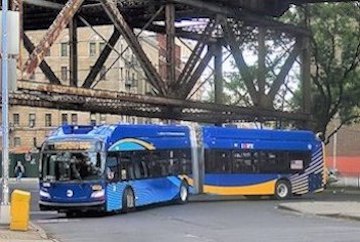 One such verdict taken before the Hon. Eileen A. Rakower in the Supreme Court, New York County, involved a 36 year old woman who was riding her bicycle to work when she was struck by a bus, as detailed below.

On the date of the incident, our client was riding her bicycle south on Broadway (also known as Union Square East) in New York City heading towards East 14th Street. At the same time, a New York City MTA bus weighing about 50,000 pounds was being driven southbound in the same direction as our client. As our client approached the intersection of East 14th Street, she noticed the traffic light change from green to yellow and began to slow down. Our client testified at trial that she was in the right lane riding her bicycle, at approximately 5 mph, when struck from behind by the bus. Our client was then pulled under the bus and dragged into the intersection, where the right rear wheels of the bus rolled over her legs. In contrast, the bus driver testified that he was driving in the center or left lane, and that our client suddenly and unexpectedly rode her bicycle across two lanes of traffic from the right lane to the left lane and struck the rear right side of the bus.

As a result of the incident, our client suffered a severe degloving injury to her right leg (where an extensive section of skin was torn off the underlying tissue) as well as fractures to the distal tibia and fibula of her left leg. Her entire claim was based on pain and suffering and loss of enjoyment of life, as no claim was made for medical expenses or lost earnings.

The excellent result was in large part due to the skillful cross-examination of our trial attorney.

How Can a Lawyer Help If I Was Hit by a MTA Bus?

Following MTA bus crashes, the New York City Transit Authority immediately responds to the scene with surface line dispatchers, superintendents, and other personnel to investigate the crash, take measurements and photographs. In that respect, the Transit Authority has an advantage because they are at the scene of the crash often while the plaintiff is still present and before evidence has been removed. However, our attorneys typically use that fact to call those Transit Authority witnesses at trial and to draw out inconsistencies between the witnesses and driver through cross-examination.

In this case, there was testimony about scratches and other marks along the right side of the bus which came into contact with our client and her bicycle. A superintendent at the Transit Authority went to the scene following the incident and investigated the crash and examined the marks on the bus. The superintendent testified that our client was traveling faster than the bus and even overtook the bus on her bicycle. He further testified that the bus was going approximately 30 miles per hour. The superintendent additionally testified that the marks on the side of the bus were caused by the bicycle’s pedal and that the scratches went from the rear to the front of the bus, which he claimed proved the plaintiff was going faster than the bus (as opposed to the bus passing the bicyclist).

However, through cross examination, our trial attorney was able to show the jury the nonsensical nature of such testimony – and that the superintendent simply lacked all credibility. For example, the superintendent also testified that our client repeatedly rammed the bus with her bicycle and, that as she did, our client was able to somehow maintain her balance even while the 50,000-pound bus was driving about 30 miles per hour. This testimony, a portion of which is excerpted above, undercut the credibility of the Transit Authority and its theory of how the accident took place.

What Elements Should I Consider When Hiring a MTA Bus Accident Attorney?

For your bus accident case to be successfully prosecuted it is paramount that your attorney be extremely familiar with the law and rules affecting MTA buses. It is also essential that your lawyer has a comprehensive command of the Federal Motor Vehicle Standards, the Smith Method of Driving and the internal Rules and Regulations of the New York City Transit Authority. Initiating a prompt and detailed investigation of the accident scene is also key. Additionally, a skillful and experienced trial attorney will help you in obtaining a fair resolution of your case

The MTA Bus Accident Lawyers at Gair, Gair, Conason, Rubinowitz, Bloom, Hershenhorn, Steigman & Mackauf are intimately familiar with the unique aspects of New York City Transit Authority Bus Accidents Claims. They have obtained verdicts and settlements that are among the highest in NY. If you were injured or a loved one died after being struck by a MTA bus in New York City, please fill our contact form or call us at 212-943-1090 for a free consultation.

New York Personal Injury Attorneys Blog - Bus Accidents
Featured Client Review
Bert Krieger My family had a 5 star experience with Gair and Gair. We were more than very pleased with the settlement and the service/guidance we received from James Rabinowitz Esq. and Tiffany Deas throughout the entire process. We couldn't have asked for better communication. We felt that the team displayed excellence in how they fought for the settlement and commitment in resolving the case.
★★★★★