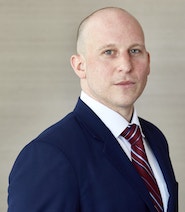 David H. Larkin focuses his practice on catastrophic personal injury, medical malpractice, and large scale construction accident law. Mr. Larkin also has wide experience with toxic tort, professional liability, nursing home malpractice, and general negligence cases. He has successfully briefed and argued several appeals on legal issues such as lead paint liability, New York Labor Law, civil procedure, wrongful death, and contractual indemnification. Mr. Larkin has also litigated cases across the Northeast on a pro hac vice basis. From 2021 to 2023, Mr. Larkin has been recognized as a Best Lawyer  One to Watch. He is involved in every stage of his clients’ litigation, meticulously attending to each detail of his cases to ensure that his clients are made whole in the wake of tragedy.

Mr. Larkin is a native New Yorker. He attended the University of Michigan and obtained his law degree from Brooklyn Law School. While in law school, Mr. Larkin interned for Judge Kiyo A. Matsumoto in the United States District Court, Eastern District of New York, and Justice Karla Moskowitz of the Appellate Division, First Department of the New York Supreme Court. These internships showed him how judges think and evaluate their cases, an understanding he uses in the courtroom today.

After college, Mr. Larkin joined the Peace Corps, where he was stationed in Costa Rica. There, he taught English in a local elementary school and conducted youth development workshops in two orphanages in his site. As a result of his over two years in Central America, Mr. Larkin is fluent in Spanish.

Prior to joining the firm, Mr. Larkin worked for large defense firms where he represented high profile clients such as the New York Yankees, Northwell Health, Turner Construction, and large New York contractors and landowners. There, he acquired a unique knowledge of how the defendants and their attorneys approach cases, which gives him a distinct advantage in fighting for his current clients.

Mr. Larkin is passionate about the practice of law and fiercely protective of his clients. He believes that, while he cannot erase the harm that his clients have suffered, he can bring them comfort and closure. He works tirelessly on each of his cases to ensure that victims of negligence get the justice they deserve.

Featured Client Review
The firm was responsive, responsible and compassionate. They quickly determined the merit of the case and worked diligently on our behalf. David Larkin handled the deposition in a sensitive manner and Christopher Donadio negotiated expertly on our behalf. We are deeply grateful for the attentive service we received and the way the case was resolved. Dan K.
★★★★★
I cannot recommend Jeff Bloom and David Larkin enough. After being misdiagnosed for several years, I was finally diagnosed with Stage 3 cancer. Jeff, David and their amazing colleagues worked diligently on my behalf to secure a settlement. The care and compassion they extended to me during this incredibly difficult time was beyond compare. Thanks to everyone at Gair, Gair, Conason! Jessica Sorbero
★★★★★
Phenomenal from start to finish. Jeffrey Bloom and David Larkin! Relentless, Determined, Professional, just a few of the words to describe this duo. I first met with Jeffrey Bloom in 2016, I had little expectations, just some hope and a gut feeling. I immediately knew I was in the right hands. Fast forward 5 years and I’m happy to be sitting on the same side of the table as Jeffrey Bloom, as I would not want to be sitting across from him. He is brilliant, fierce and a force to be reckoned with. David Larkin, I cannot say enough about him, he prepared me so well for my depositions. I was anxious and distressed; David was comforting with his calming nature and his confidence throughout the day was reassuring. His attentiveness to my emotions made this most stressful day manageable. I truly appreciate Jeffrey and David’s prompt response to emails and phone calls. They kept me up to date on my case and were available upon request to discuss anything I didn’t understand. Someone along the way told me I had hired the best attorneys in the universe and I could not agree more. Forever grateful to this team, I will never be able to thank them enough. Stacey D.
★★★★★

Submit a Law Firm Client Review
Read our 50+ reviews on Google!
Client Reviews
★★★★★
"Very compassionate, very efficient and top rate! If you want a team of good lawyers that will not only work hard to win your case but knows how to listen and feel for you as a victim of medical malpractice, this firm is your only choice. Anthony Gair, was always there for us all throughout the case albeit the distance from NY to Manila! Words cannot express how thankful we are to him and his team. Thanks a million!" D.F.
★★★★★
"Everyone I communicated with at this firm made me feel like I was part of their family. My needs, feelings, and concerns were carefully considered and given the needed attention. My counselors were available whenever I needed them and became my personal friends. They came highly recommended and lived up to their reputation. I would recommend them to any of my friends without hesitation. This firm gives attorneys a "good name". Clients matter here. They made me feel like I mattered as a person, that I was valued, and not just a possible source of income for the firm. They earned their fees, and you will find that they will also earn your trust." N.W.
★★★★★
I met Diana Carnemolla and Howard S. Hershenhorn during the darkest time of our lives, when my husband was in a coma with very little chances to survive, due to a car accident. The compassion and professionalism that they showed myself and my family during such a difficult time combined with an incredible willingness to get the best results for us have shown us that we had made the absolute best choice. They not only fought extremely hard for what proved to be a very difficult case, but they also emotionally helped us through this incredible ordeal and have been a caring advocate for our family and our case. They got us the best results we could have expected given the circumstances and didn't give up when things got more challenging. We would absolutely recommend their Law Firm to handle the toughest of cases while providing such a great deal of personal support. Diana proved to be personally invested in our case ultimately seeking the best outcome for our family. We cannot thank them enough for what they have done for us. V.P.
★★★★★
"I’m very impressed by the professional services of this law firm Gair Gair Conason. Most importantly Diana M.A. Carnemolla, Esq. She performed impeccable work ethics and professionalism whole time throughout, with her constant follow ups and communication skills, for that I’m very appreciative of. August 2020, my mother was in a horrific car accident. I contacted Gair Gair Conason to handle my mother's case. Everyone at the firm who helped us with the case did such a fantastic job with being so efficient. We could not have been more satisfied with the services we received. Diana M.A. Carnemolla, Esq. was so fast, quick answer for every question that we asked and gave us honest information about the possibilities concerning the case. She resolved our case much faster that I would expect. Thank you so much! I am very happy with this law firm. Especially the outcome from it all and how easy they helped make it be for us. We had a tough case to fight regarding the incident with the other driver, thankfully it all worked out in my mothers best interest. Diana M.A. Carnemolla helped us settle our case easily, helped us get out of it with a much needed win. I’m surprised it wasn’t as bad of experience as I thought it would be. We were pretty worried in the beginning with much thanks to this team they’ve helped solve this for my mother and put much of my worries as well as my mothers to ease. Thank you again from my family to your whole team for an awesome job!! I would highly recommend this law office to anyone in need of outstanding representation." K.C.
View More
Submit a Law Firm Client Review